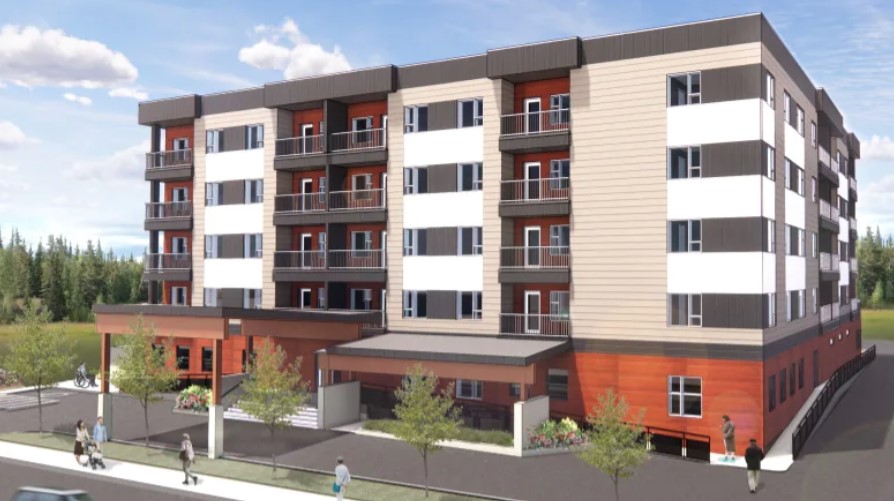 10 of the 26 affordable housing units leased to Yukon Housing Corporation.

An 84-unit apartment building for seniors, including 26 affordable housing units, is scheduled to open in 2022 in Whitehorse’s Takhini neighbourhood, the Yukon government announced Tuesday.

Normandy Manor, which has been in the works in some form or another for more than a decade, is being built at 468 Range Rd. Construction began in August 2020.

The plan is to build 10 bachelor, 70 one-bedroom, and four two-bedroom apartments.

Of the 26 affordable housing units, 10 have been leased out to the Yukon Housing Corporation for 20 years for $3.5 million.

Borud Enterprises, Ketza Construction, and Northern Vision Development (NVD) have partnered under the group KBC Developments to develop the property.

Prices for affordable housing units are going to be set at 80 per cent of the median rent for the same kind of unit in the city, according to Michael Hale, NVD’s president.

He referenced the Yukon Bureau of Statistics’ Yukon Rent Survey.

Hale said they are building a home for people who may struggle to live on their own but are not ready to live in continuing care, government supported housing.

“We intend to build a community where Yukon seniors can have a social life, independence and continue to engage in the broader Whitehorse and Yukon communities,” he said.

Affordable housing units will be made available for the entirety of the building’s 50-year mortgage, Hale added.

There will be an additional charge for services, including 24-hour staffing, housekeeping, meals, and recreational activities. Pricing for that is still to be determined.

Hale said the aim is for a late-summer opening date, and the company is accepting names for its wait list.

Determining what age makes someone a senior in this context is still being worked on, as is whether non-seniors will be allowed to live there, he said.

The Canada Mortgage and Housing Corporation will provide about $34.5 million for the project. Hale said that’s in the form of a mortgage, all of which will have to be paid off except for $5 million.

The Yukon government is providing a $1 million split evenly between the Housing Initiatives Fund, and the Municipal Matching Rental Construction Grant.